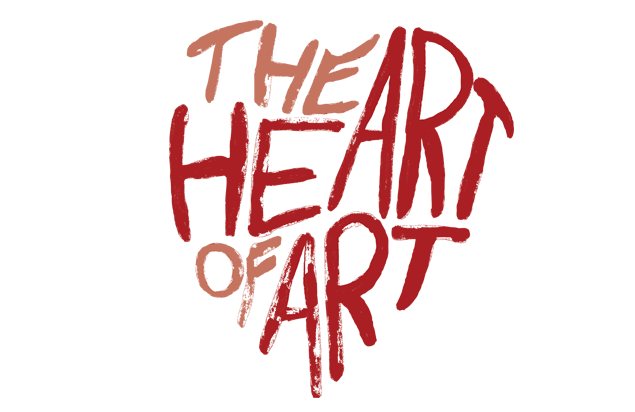 The Heart of Art: Natalie Hartman’s Passion for the Arts Makes Her Popular with Both Kids & Adults

Natalie Hartman sat at her kitchen table last summer with a few Sharpies and a stack of drawing paper, working to illustrate a coloring book a Girl Scout had asked for her help on as part of a badge requirement. Her 11-year-old son, Derek, watched over her shoulder eating a bag of chips.

“That looks really good Mom,” he said while dropping crumbs on her work. Hartman carefully laid out the pages in order on the floor, only to see them trampled by her dog a few moments later.

Initially overwhelmed by the task of designing a coloring book from scratch, Hartman kept the faith by reminding herself that the project was for a very important cause, helping a local Girl Scout create a piece that would spread awareness about pediatric cancer.

“I was really touched by the story that this young girl had written and I just couldn’t say no,” she says.

Today, the coloring book is in the process of being published and will be distributed to cancer patients in hospitals throughout the country.

“The only thing I asked for in return for my assistance was the opportunity to go to one of the hospitals and help give out the finished books and crayons,” Hartman says. “Watching those kids smile would make it all worthwhile.”

In addition to working on art projects from home, Hartman is also an extremely popular teacher at the Banana Factory, where she’s known
not only by her following, but also for her energy and creativity, especially when it comes to instructing children. The Bethlehem resident says she finds working with kids to be an incredibly rewarding and fun experience.

“I’m like a big kid,” says Hartman, who teaches several different programs at the Banana Factory including Itsy Bitsy Artists, a fun-filled, engaging parent-child class, and a brand-new ages 10-12. “I feel very comfortable with them and they feel comfortable with me. If you make art intimidating, they’re not going to want to come back.” 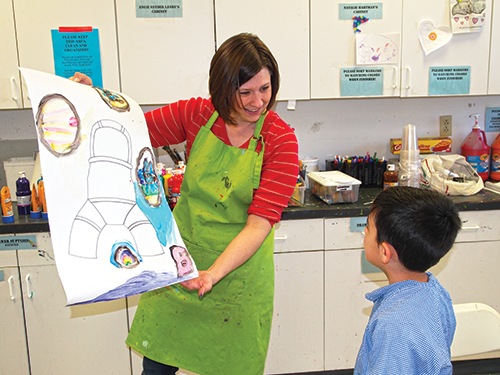 Hartman first became involved with the Banana Factory when her son was in first grade. At the time, she was a stay-at-home mom and received an invitation to teach after-school art at a local elementary school. She was approached by ArtsQuest at a school event, and everything fell into place from there.

“I was thinking, ‘What am I going to do with myself?’” she says. “I needed a creative outlet. You can’t just sit at home and make stuff for yourself.”

“You have the freedom to get as creative as you want,” she says. Hartman tries to keep kids excited and interested by making unexpected projects out of everyday items. Some popular projects include transforming plastic milk jugs into masks, balloons into piggy banks and pipe cleaners into
blossom trees.

“A lot of it is inexpensive and recyclable, and the kids are amazed at what you can do with something you’re about to throw away,” she says.

“I pride myself on getting the most out of my budget.”

Making something out of nothing is Hartman’s self-proclaimed forte.

“I see something and I know I can adapt it and change it and make it into a workable project,” she says.

Hartman also finds inspiration everywhere she goes, whether it’s in other people’s art or a random item on a shelf. Her resourcefulness doesn’t end in
the classroom or art studio either. For example, when Hartman and her husband, Randy, were newly married, they wanted to take on a project together. While driving around Bethlehem, they noticed an abandoned pub for sale, so they took a chance and bought it.

“It was dirty and gross and smelled bad, but it was cool because it still had the original bar and woodwork,” she recalls.

Hartman says the place was “a total nightmare” and took eight years to renovate, but now her family lives upstairs and rents the downstairs bar to a young couple. The time it took to fix up the building may have been a deterrent for some, but for Hartman, finishing the project just left her and her husband craving another fixer-upper.

“It’s the whole turning something ugly into something beautiful thing,” she says. “It’s so satisfying!”

Fixing yet another “nightmare” house, teaching several art classes, helping out with after-school art programs and volunteering with local charities all provide Hartman with the creative outlets she needs in life. While she’s always extremely busy, she also tries to place a heavy emphasis on fun. To this end, most of her classes at the Banana Factory end with a party. The ultimate goal – to be as relaxed and have as much fun as possible while finding teachable moments along the way.

“I’m always stressing to the kids, ‘Make sure you don’t get cheeseballs on your paintings,” she says with a laugh. Natalie Hartman is teaching three
camps at the Banana Factory this summer – Little Camp Banana and Art Explorers for Ages 4-6 and Board Game Design for Ages 10-12.

To sign up and learn more about all of our 60 summer camps, visit www.bananafactory.org.