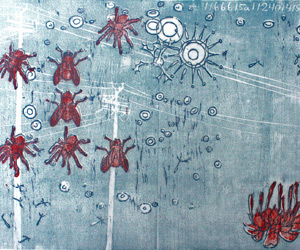 Barbara Bjerring is currently a resident of Riegelsville Pa. but is originally from Philadelphia. She got her BFA from Moore College of Art and Design where she was a graphic design major before getting her BFA in 1991. Her influences were Chaim Soutine, Egon Schiele, Lucian Freud, Georg Baselitz, Anselm Keifer, Willem de Kooning, Jean-Michel Basquiat, and David Wojnarowicz. Her goal was to uncover an invisible sentiment through paint application, iconography and composition. Barbara was also interested in science and in 1994 decided to collect credits at Philadelphia Community College and Rutgers University towards getting a degree in forensic art. She switched her focus back to graphic design at University of the Arts in Philadelphia. She worked as a website designer for a few years at an Internet advertising firm. She was accepted to the Pennsylvania Academy of Fine Art and graduated with a Post-Baccalaureate in 2008. At PAFA she focused on woodblock printmaking and fiber art. She became more interested in artists with a graphic sensibility like Barbara Kruger, Banksy, and Robert Rauchenburg.

In 2010 Barbara began teaching art at Tinicum Art and Science, a small private Buddhist High School for at-risk students in Ottsville Pa. She received her Master’s in Art Education with a minor in Studio Art focusing on fiber and ceramics from Temple University Tyler School of Art in 2015. At Tinicum Art and Science she taught drawing, woodblock and silkscreen printmaking, sculpture, ceramics, painting and fiber art. Barbara’s curriculum was based in contemporary art, art history, materials and techniques, interdisciplinary study and writing skills in a student-centered pedagogy. She stressed to her students that knowledge is the best medium. Her upper level students were encouraged to exploit the medium/mix-media that best articulated their expression rather than the medium they naturally gravitated towards. Many of Barbara’s students have gone on to higher art education.

In 2016, Tinicum Art and Science closed and Barbara went back to her studio art practice, the place where she finds sanctuary. Besides developing the Deeply Flawed pottery and gift paper line, Barbara is studying Squeak Carnwath, Kiki Smith, Louise Bourgeois, Yayoi Kusama, Agnes Martin, Jo Baer, Oyvind Fahlstrom and quantum physics. She uses woodblock printmaking, ceramics and fiber art in an attempt to combine ideas about science, spirit and the mundane through iconography, medium application and text to uncover an invisible sentiment.

Art is made up of two parts that together support an idea. There’s the iconography, or visual literacy, or symbolism, and then there’s the material that together articulate the idea directly.

The ideas come from questions like what is real, what is dangerous: the existence of two worlds, two realities, what is visible (formalism) and our private language (inspiration) and creating truth from that. It’s every human’s paradigm. Formalism is the natural world that includes brushing your teeth and keeping clean, nourished yourself and simultaneously paying attention to intellect and what’s above the surface of being (inspiration). The brain and the spirit are often put at odds against each other in that it may be believed that one is more reliable that the other. We use formal and inspirational aspects of being, divide and categorize them and kept them separate in order to understand ourselves.

An example of iconography is in the woodblockprint called “On the Surface.” This print is about practicing respect, communication and love. The tarantulas, flies, and the weed in the lower corner of the print live on the surface of the planet and are very important and beautiful in their own way.They are somewhat unappreciated by humans. They are symbolic of human judgmental and egocentric propensities. These images remind me that I should be humble and not to take more than I need and to have deep respect. The telephone poles pierce the surface of the landscape and extend into the atmosphere. The poles relate to an old fashion kind of communication etiquette, of being completely available and open to listening because telephones were anchored to the wall. The blood cells are the physical symbols of my lineage on the planet. The numbers and letters at the top, 1166615a112401415p, represent the measurement of time that my father and I were on the planet together. The space between my birth date and my father’s death date is a time I felt the world made the most sense.

My fiber art, as a material, is more about skin or biological tissues and how its an envelope holding in stuff, not only organs and fat but stress and anxiety stuff that is more fleeting and temporal, stuff you might want to hide. The ceramics vessels reflect on the outer surface stuff that is happening on the inside too, but stuff that might be more permanent like love and growth, trying to understand science and the universe and how it all comes together. The prints are like playgrounds where I play with the iconography, juxtaposition and color because they’re easier to make and feel more carefree. The artwork production is going through some changes but it seems the ideas are being worked out in the prints first and then being made in fiber or ceramics or both.