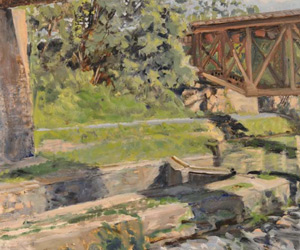 James comes from a family of 8 girls and 5 boys. His earliest memories are of sketching with his older brother. Two older sisters studied art, and his mother and father both encouraged his talents.

He received extensive training in art and architectural history, drawing, rendering and literature while earning a BFA in Scene and Costume Design for Theater, including the materials and methods of art making. This interest in materials led him to study fresco at Parsons, and Scagliola in Rome and Venice, and to investigation of traditional oil painting materials and methods.

The craft of painting— preparation of gesso and media, painting “en plein aire”– became integral to the outcomes of his work, informing and affecting the end result. There is a dialog between the artist and his materials; a personal philosophy that a practicing artist is not just applying paint to canvas, it means living with open eyes and ears, and approaching everything with thoughtfulness and creativity.

Nature is first and foremost in his work, including the figure. James has always been interested in drawing portraits, sketching people in daily life— riding subways, in waiting rooms, at concerts. He’s attended and hosted figure sessions throughout his career. He works in conte pastel, and watercolors when rendering dancers and musicians at work.

In 2006 he founded the non-profit Totts Gap Arts Institute, a community arts center for fine and performing arts in Mt. Bethel, PA. acting as Artistic Director. He teaches on a regular basis, and it is an integral part of his life as an artist.

I have always been intrigued by the traditional forms, techniques, and craft of art making. This was partly a search for less expensive but durable materials, but was also a reaction to the mundane. Early in my education, I was inspired by an influential drawing instructor who encouraged resistance to ready-made tools and materials. He pointed out that what one uses to make art must affect the outcome. Consistent pieces of conte, ready-made, standard-sized canvas, and 18×24 paper are all limits on expression.

Art communities often prioritize originality. By asking: who is served by standardization? one questions the Industrial Revolution assumptions of progress. Rather than suffering from the estrangement that comes from losing control over the elements of one’s own process, engagement with methods provides meaning to our work.

By developing a familiarity with the component parts of the materials and techniques of painting, I engage in a dialogue. Inconsistencies in materials are, in fact, opportunities to explore the dynamics and properties of raw materials. Expectations are modified, new paths are opened, and new ideas are stimulated. A focus on the process becomes as meaningful as the product. For me, making art is a way of connecting with the essence of being, by living in the moment of the creative process.

In the summer of 2016, I began a series of paintings in my garden. Working in a familiar medium-oil on linen-I began to alter my approach. I gradually increased the amount of marble dust in my paint to create dimension. This series led me to even broader use of impasto, and no transparent glazing. The resulting paintings are more about surface and immediacy. Afterwards, I could see a consistent through-line in the abstract textural rhythms and the soft shadows of dusk.

This exploration has led me broadening my approach to plein air painting; to focus attention on the ‘skin’ or surface of the painting as much as formal qualities of light and space.