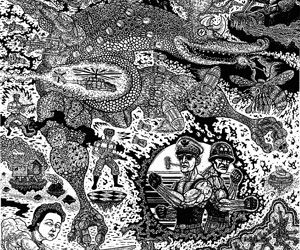 Jesse Shaw (b.1980) is a printmaker from Tennessee primarily working in relief prints carved from linoleum blocks. His work is based in the narrative, satirical, political, and social commentary tradition of the graphic print. Jesse is currently working on a series of fifty prints depicting the epic story of America. He has completed 28 prints in the series over the past nine years. Prints from his “American Epic” series of linocut prints have been exhibited nationally in Nashville, New Orleans, New York, New Jersey, North Carolina, and Philadelphia. Exhibitions include “American Epic,” Vanderbilt Divinity School, Nashville, TN, 2016 Art on Paper Art Fair, New York, NY, “New Prints/New Narratives Summer 2013” IPCNY, New York, NY and at Du Mois Gallery part of the 2012 SGCI Navigating Currents, New Orleans, LA. Visiting Artist and Guest Speaker appearances include Vanderbilt Divinity School, Nashville, TN, University of Anchorage Alaska, Anchorage, AK, and the University of North Carolina Greensboro, Greensboro, NC.

Artist Statement
When I pulled my first print my artistic vision became tangible for the first time. After the second print I began to realize what the word infinite could mean to me. I gained personal meanings to many words through printmaking, including devotion, self-discipline, perseverance, and craftsmanship.

I traveled to Dartmouth College in New Hampshire to study Jose Clemente Orozco’s mural “The Epic of American Civilization” in 2008. Upon seeing the mural in person I was struck by how powerful the work is and spent an afternoon admiring the imagery. This mural was the initial inspiration that motivated me to begin my interpretation of the American Story.

This interest in Orozco’s work led me to Mexico to study Mexican printmaking and the works of other Mexican muralists including Diego Rivera, and David Alfaro Siqueiros. The intensity and sincerity in the murals, along with the history of the political and social purpose of printmaking in Mexico, brought me to approaching printmaking like a muralist.

Each print in my series begins with a theme in which I can explore and research an interest. Technology, American rituals, consumerism, allegory, printmaking history, and religion are some of the topics I have articulated in the series. It generally take me about 7-9 months of work to complete each one. I start with a blank piece of linoleum and always have a single idea to start me off, but not the whole composition or content or preliminary planning. I will draw in a small section of the large block until I express the idea through imagery. That is when I begin carving, just the area that I have drawn and committed to. The carving itself takes a while and this allows for my mind to wander, listen to documentaries of films based on the subject matter I am working with, and I will generate other ideas in which I will plan and draw and carve out that area. I work in that manner until there is no space left to carve. So, I work from the bottom up, building the image of months and months leaving it the only artwork I am focusing on. I find this an exciting way to work, I keep my eyes and ears open for visuals and ideas that can go in the work. I never know exactly how the image will resolve itself.

I want to tell this story from my point of view as I see American Life, and to create new allegories, narratives, iconography and symbolism based on my first hand accounts, and my personal baggage. I knew in starting the body of work that it may take 20 years to complete and that I would be a different person by the end of it.

I have been working on the American Epic series for nine years and have completed 28 prints. Nationally, the work has been shown while in progress as the series reaches the fifty prints that will make up the overall work. In addition to the series, I have continued to explore other mediums, techniques, and collaborations as an extension of the American Epic prints.