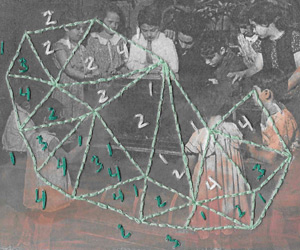 Nicole Gencarelli is an artist, curator, and arts administrator based in Allentown, Pennsylvania (Pa). She is currently works out of the Cigar Factory Artist Studios on her own art, which she has shown in numerous exhibitions in Pennsylvania, New York, and Boston. Her work is multi-disciplined in its materials; she enjoys connecting her strong background in painting with printmaking techniques and fiber arts. Conceptually, she is interested in the philosophy of science and cognitive theory, and much of her work addresses themes within those fields.

Nicole has also had a strong focus in art historical research; she received a grant in 2013 from Indiana University of Pennsylvania (IUP) to continue her research on the representation of Leda and Swan on Byzantine textiles and the blending of mythology and religion to create syncretic narratives. Her research also discussed connections of Byzantine narratives of women in mythology and theology to contemporary narratives of rape culture, which was featured at the 2014 Undergraduate Scholars Conference at IUP and received special recognition. She enjoys working with the theme of representations of women in art, her previous research focused on the notable cult statue Artemis of Ephesus and redefining the statue’s role in religious ritual, in addition to the imagery carved into the stature and the large, pectoral protrusions attached to the figure.

Nicole has curated and co-curated four shows at the Alternative Gallery in Allentown, Pa and also works at the Banana Factory in Bethlehem, Pa with a role in arts administration, and assisting the expansive art education program offered at the arts center. She is passionate about contemporary art and is always researching for her next projects working in the contemporary art world.

Artist Statement
My work focuses on questions related to consciousness, thought processes, and the role of science in expanding or contradicting philosophical ideas connected to these themes. I work mainly with embroidery and photo transfers to create a narrative for the viewer about these philosophical dilemmas, with a focus on mathematical equations and diagrams. The “Untitled” series presents the viewer with a logical, metaphysical language for describing the world they are conscious off, but offers little connection elsewhere, leaving the viewer to perhaps question the validity of such statements.

With the “Untitled” series, I am additionally interested the material of the work. Embroidery was historically a craft for women and seen in a domestic setting. In my series, the embroidery challenges this history through conveying complex scientific and mathematical principles, disciplines historically reserved for men.