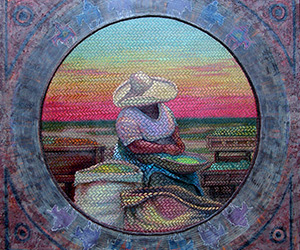 Ramon Peralta, Born in Santiago, Dominican Republic, Ramon has become one of the most promising artist in the Lehigh Valley. He studied painting and drawing at the School of Fine Arts in Santiago where he graduated and received a degree in fine arts. After relocating to the United States, he studied drawing at the Art student League in New York City. His art focuses on an imprint of human life, of human creation. Ramon imaginatively engineers flat planes into three-dimensional forms that gesture and emote in decidedly familiar ways. He powerfully places the surreal, yet humanistic, forms on richly colored or intricately detailed backgrounds and presents them to the viewer to ponder.

Ramon Peralta is a sort of restless machine who loves to dig in the unfathomable labyrinths of the soul. With sharp sensitivity and a singular sense of creation, his work becomes a fertile landscape for the imagination and scrutiny. Such is the sense that animates this current body of work in which storytelling and delirium go hand in hand. In this series the artist’s creations comes from the establish relationship with paper as a material, one of tools the artist use in initial process of creation. A compendium of recent works that envisions new lines of exploration, images of sophisticated brush lines turned into characters who trap all sorts of mysteries in their imaginary forest. The strength of color and the sensibility of strokes create a movement thatdoes not exclude the spectator, but includes him, inviting him to activate his visual and emotional perception. Referring, in this case, to a fine art language that attracts both the linear writing as well as the speed with which color changes its attire,its meaning, growing dim and firing up equally whether the image be a character, or vegetation, or fields. His work as a result brings the viewer to a place of hope, rhythm, smile, remembrance or surprise.

Peralta’s proposal draws from the deep well of magic and realism. Both descriptions reveal essential attributes of an artistic personality that regards his artistic endeavor as creator; the right cauldron in which paper are transformed into alive character. On the other hand, there is something very special in the artist’s canvases that transport us through time in an unsurpassed way. While there are indeed surrealist elements in his work, such as psychic automatism and chance, that act as integral components and nourish the creative process, we also cannot deny a realist undercurrent and an attraction to history that inspires and is the cornerstone of Ramon Peralta’s proposal.

Alexis Mendoza is an artist, writer, critic and curator from Cuba. Presently he live and work in New York City.